The ‘purple, white stars and cap’ of Denise Martin’s Star Thoroughbreds have become part and parcel of the racing scene in Sydney. John Berry takes a look at the record of one of Australia’s most successful syndicators.

Over the past 24 years the distinctive silks have become synonymous with many of the best and most popular gallopers to have graced the city’s racecourses. Martin seems to have come up with yet another top-liner following the victory on Saturday in the $500,000 Inglis Nursery at Randwick of Accession (Brazen Beau).
High among anyone’s memories of Golden Slippers past must be the joyous scenes after Star Thoroughbreds’ Sebring (More Than Ready {USA}) took the race under Glen Boss in 2008.

The winner the following Saturday of the G1 AJC Inglis Sires’ Produce S. and subsequently sold for $28 million to join Widden’s stallion roster, Sebring was the perfect syndicate horse, giving his share-holders a massive return on their investment and, even more importantly, thrills that money just can’t buy.

The shared happiness evident in the Rosehill winner’s enclosure that day was the perfect advertisement for the racing game, and another G1 Golden Slipper triumph could be on the horizon following Accession’s victory as the prize money he earned on Saturday will guarantee him a run in the race if connections wish. He is clearly a very exciting colt who was well bought when knocked down to Star Thoroughbreds Pty Ltd / Waller Racing for $300,000 from the Widden draft at this year’s Inglis Australian Easter Yearling Sale.

The most obvious difference between Sebring and Accession is that the former was trained by Gai Waterhouse while the latter is in Chris Waller’s care. For the first 20 years of its existence, Star Thoroughbreds was synonymous with Gai Waterhouse’s stable, but over the past four years it has been operating in tandem with Chris Waller. Predictably, the change from one top-class stable to another has had no impact on its huge success.

A diverse background
Denise Martin was working in the hospitality business in a senior role at Melbourne’s Sofitel Hotel in the early ‘90s when she developed a rapport with Waterhouse, who stayed there on her visits to Victoria. It was still early days in Waterhouse’s training career at that stage, and the pair instantly realised the potential of their shared passion, acumen, flair and charisma. Martin consequently set up Star Thoroughbreds in 1994, syndicating horses to be trained by Waterhouse, and the rest pretty soon became history. Good horses started coming along at a remarkable rate.

Danglissa (Danzero) was Star Thoroughbreds’ first true top-liner, enjoying a winning spree in Sydney’s top fillies’ races in the spring of 1999 by taking the G3 Furious S., G2 Tea Rose S. and G1 Flight S. before heading down to Melbourne to finish second in the G1 Thousand Guineas at Caulfield. The multiple stakes winners Stoway (Geiger Counter {USA}) and Kingsgate (Danzero) came to prominence shortly afterwards and kept the Star flag flying as the old century gave way to the new.

“Sebring was the horse who took Star Thoroughbreds to the very top.” – John Berry

Sebring was the horse who took Star Thoroughbreds to the very top, but he was merely one of several superstars who made 2008 a real annus mirabilis for the operation. While he had cemented Star Thoroughbreds’ reputation for unearthing a top juvenile, later that year two of its older stars reminded us of its ability to produce the type of tough, high-class older horse on whom the game thrives.

Success starts to roll
That year’s G1 Epsom H. at Randwick produced a wonderful result for Star Thoroughbreds as the five-year-old Theseo (Danewin) and the four-year-old Bank Robber (Dash For Cash) filled the quinella. Theseo headed down to Melbourne later in the spring and landed the G1 Mackinnon S. at Flemington before subsequently landing three more weight-for-age G1s in later years. He ended the 2008/’09 season as Australia’s Champion Middle Distance Horse of the Year (and NSW Champion Racehorse of the Year) thus giving Star Thoroughbreds HOTY honours for the second season running following Sebring’s award of Champion Two-Year-Old Colt of Australia for 2007/’08.

Hot on the heels of Sebring came another juvenile money-spinner, Driefontein (Fastnet Rock) who landed the Magic Millions 2-Year-Old Classic in 2012. The popular filly then developed into a proper trooper over the subsequent three seasons, ultimately winning five Group races including the G1 Sportingbet Classic Robert Sangster S. in Adelaide as a four-year-old. She even posted some fine efforts as a five-year-old in the 2014/’15 season including finishing second to Deep Field(Northern Meteor) in the G2 Tab.com.au S. at Flemington on VRC Derby Day.

Coaching change
By the time that Driefontein was a five-year-old, Gai Waterhouse was no longer Star Thoroughbreds’ principal trainer. During the Magic Millions Sale in January 2014 it had been announced that, while Driefontein and the other horses already in Tulloch Lodge would remain there for the rest of their racing days, all new recruits would henceforth be joining Chris Waller’s burgeoning stable, for which nowadays “Star Thoroughbreds are the exclusive licensed syndicators of yearlings to Chris Waller Racing”.

Life goes on, and it has certainly gone on for Star Thoroughbreds following this change of direction. One of Chris Waller’s many strengths as a trainer is that he can juggle things with a huge string of horses and massive bank of clients so that every horse and every client has joint-top priority.

Star Thoroughbreds fits perfectly into this well-run operation and has become an integral part of the stable, and ironically it was a Star Thoroughbreds horse who has come closest to derailing the winning run of Waller’s stable star Winx (Street Cry {Ire}).

Foxplay (Foxwedge) was a wonderful filly for Star Thoroughbreds. In the spring of 2016 she emulated the feat of Danglissa seventeen years previously by emerging as the winner of the ATC Princess Series, and she then went on to take both the G2 Phar Lap S. and the G1 Coolmore Legacy S. in the autumn. Arguably her finest hour, though, came the following spring in the G2 Bob Ingham Warwick S. at Randwick when she had the nation holding its breath for a few agonising seconds, only losing the lead in the shadows of the post when Winx’s barn-storming finish allowed her to snatch a thrilling head victory from the jaws of defeat.

Stars for Star Thoroughbreds during 2018 have been G1 Rosehill Guineas winner D’Argento (So You Think {NZ}), G2 Silver Shadow and G3 Widden S. winner Fiesta (I Am Invincible), G2 Shannon S. winner Noire (Foxwedge), G3 Doncaster Prelude H. winner Cellarman (Mossman) and the ultra-tough Invincibella (I Am Invincible), winner this year of three G2 races in three different states as well as taking the Magic Millions Fillies and Mares S. at the Gold Coast. Accession looks sure soon to be following them by adding black-type laurels to his crown as Denise Martin’s Star definitely remains in the ascendant. 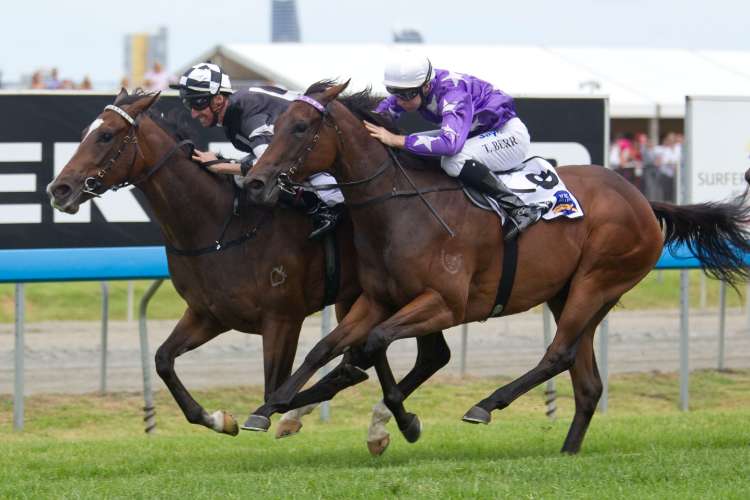