Our purple and white stars shine across two states

Saturday was a good day for our Star stable as we recorded two winners in the space of 20 minutes in two states before midday. CATWALK won her maiden at Royal Randwick quickly followed by INVINCIBELLA winning back to back editions of the Group 2 Dane Ripper Stakes at Eagle Farm. The day was almost especially memorable as our 2 year old colt KUBRICK missed by only a short half head in the Group 1 JJ Atkins.

CATWALK was stepping up to metropolitan company over 1,000 metres following a narrow defeat at Gosford at her race  debut a fortnight ago. The 2 year old daughter of Foxwedge was initially a little fractious in the barrier but jumped on terms then settled at the rear of the field where jockey Jay Ford got her into a nice rhythm with plenty of cover. She tracked into a three wide line rounding the home turn and although she became slightly unbalanced at that stage of the race, the filly knuckled down and accelerated nicely in the heavy 8 track conditions to hit the line well and win by a half length recording good sectional times overall. CATWALK was a 2018 Magic Millions yearling purchase from the draft of Edinglassie Stud and is brilliantly named as she is out of Runway Runaway. Jay was complimentary of the filly post race remarking that it looks likely she has a bright future. The attraction of the BOBS bonuses in NSW was evident once again with the filly earning $80,500 inclusive of the additional payment for the win; a good “pay day” at her second start.

INVINCIBELLA defended her Group 2 Dane Ripper Stakes title on Saturday at Eagle Farm to go back to back in the race in exactly the same fashion that she did with her $1 million Magic Millions Fillies and Mares race win again earlier this year. The mare jumped well and went forward to settle third on the rail in the 1,400 metres event. It was a brilliant move by jockey James McDonald who described her post race as a “mighty mare”. Her last 600 metres recorded as 33.59 seconds was the fastest of the 9 race card as INVINCIBELLA fought off challengers close to the line including NOIRE our Group 2 winner who produced an eye catching performance to run fourth coming from well back in the field. Both mares now head to the Group 1 Tatts Tiara at Eagle Farm on 22nd June. INVINCIBELLA was a Magic Millions graduate and now boasts the impressive record of 10 wins including four at Group 2 level with over $2.1 million in prize money earnings. She will clearly be a magnificent broodmare prospect at the conclusion of her race career. 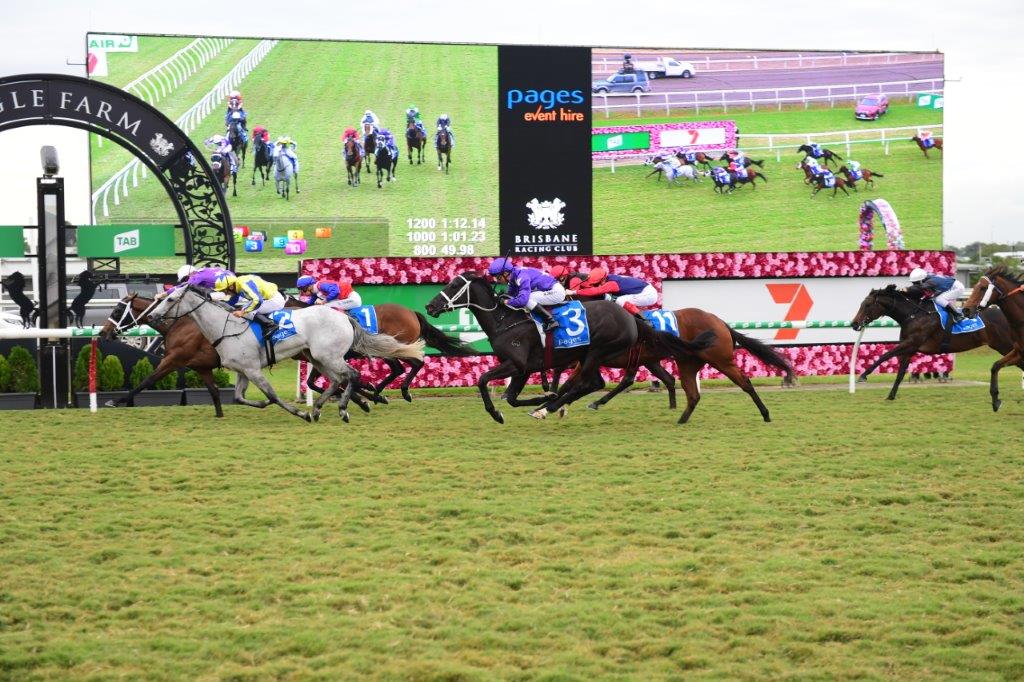