For a horse whose racing career spanned just six race starts over four fabulous months, Sebring’s impact was extraordinary whether it be for his first-time owners, his young jockey and eventually the staff at the stud farm he stood at as a successful stallion.

When Widden Stud boss Antony Thompson used the term “life-changing” to describe Sebring’s impact and legacy after the stallion’s passing on Saturday, it wasn’t hyperbole.

Sebring was the first horse John and Anne McDonnell ever had go to the races and when the 2008 G1 Golden Slipper and G1 Sires’ Produce winner was edged out in the G1 Champagne Stakes less than four months later, it was the first race they had ever lost.

It was some sort of rollercoaster for the couple that, needing a new hobby upon moving back to Australia from New Zealand, had bought 20% of the $130,000 yearling purchase with trainer Gai Waterhouse and syndicator Star Thoroughbreds.

“For us, he changed racing from an interest to a passion, and our lives changed very dramatically because of him. He has changed a lot of lives.” – Owner John McDonnell

“For us, he changed racing from an interest to a passion, and our lives changed very dramatically because of him. He has changed a lot of lives,” an emotional John McDonnell told TDN AusNZ on Sunday. “We now own three dozen horses, including racehorses and breeding stock, and this all comes from Sebring. Before Sebring my wife couldn’t even listen to a horse race and now she runs two Facebook pages and a twitter account dedicated to racing.”

Those social media feeds, and many others, were flowing with tributes for the beloved chestnut stallion on Sunday after the 13-year-old died from a heart attack in his paddock on Saturday.

“On a day like today, it is still pretty raw, and we are trying to look at the joy he gave us,” McDonnell said. “It’s like a death in the family, but we are taking a lot of comfort from the fact he just laid down and died. He didn’t hit a fence, or have an accident.”

First-time owners to industry stalwarts
The McDonnells stayed in the game when Sebring’s whirlwind career came to an end after just six starts, a move that paid off as the young sire moved through the ranks.
“We were advised by all and sundry that we were idiots for not selling our interest in him, and we obviously haven’t regretted that,” he said. But almost everything we have got from Sebring we have put back into the industry.”

“Almost everything we have got from Sebring we have put back into the industry.” – John McDonnell

“We came into a sport that was completely foreign to us, but now I say to everybody that I have two wishes, one, that everyone could own a horse, and that two, that their first horse could be as good as Sebring. I just wish everybody could experience what we did with Sebring,” McDonnell said. “It really is the most amazing game.”

“I just wish everybody could experience what we did with Sebring.” – John McDonnell

The syndicator
Even for Denise Martin, who had already achieved considerable success to that point, Sebring was a game changer and a personal favourite as her first G1 Golden Slipper winner. It didn’t start smoothly though, with the yearling purchase proving a hard sell for the syndicator.

“He was actually passed-in at Gold Coast Magic Millions Yearling Sale but Gai recommended I look at him. Actually, I thought the price was a bit high as he was out of a mare that was a 17-start maiden and by More Than Ready (USA), who had yet to prove himself in Australia. I suppose he changed More Than Ready’s career here too, because he was about to become a star stallion in this part of the world.”

Sebring was hard to sell, as potential buyers grappled with the notion of an American sire and a maiden mare.

“As it turns out, Sebring was proof to me that dreams can come true in racing.” – Star Thoroughbreds’ Denise Martin

“I took him off the market, and just as we were trying to sell him a second time, equine influenza hit. He was out at Muskoka Farm and we had him vaccinated very early,” Martin said. “He spelled for several weeks and in early October he went back into work and he was quickly identified as a special horse. We were able to sell him, and the rest is history. As it turns out, Sebring was proof to me that dreams can come true in racing.”

The career changer
When Blake Shinn arrived in Sydney from Melbourne in 2007 he was soon riding winners but the 20-year-old phenom had yet to find the banner horse every jockey needs to take them to the next level. He soon found his star with Sebring.

“He was a career-shaping horse for me.” – Blake Shinn

“He was a career-shaping horse for me,” Shinn said. “I had just arrived in Sydney and he was the first top liner I was connected with. That started a long and fruitful relationship with Star Thoroughbreds that still continues to this day.”

Even the fact that Shinn missed Sebring’s Slipper win through suspension, with Glen Boss taking the reins, gave him confidence when connections stuck with him for the Sires’ Produce and Champagne Stakes.

“I identified Sebring as a real talent when he first arrived with Gai and stuck with him right through his trackwork and trials, the Slipper was the only race I missed on him,” Shinn said. “He was just a lovely horse that I had a great affinity with and a special bond. When he was retired it was great to see his career keep developing as a top class stallion.”

King of the Valley
When Sebring arrived at Widden the big chestnut soon developed a reputation as a horse that liked to do things his way, but was never truly difficult.
“It was like he knew he was the king of the Widden Valley, he knew he was a special horse and if he didn’t want to do something, he would wait until he wanted to.” – Widden Stud stallion manager, Nathan Curry

“It was like he knew he was the king of the Widden Valley, he knew he was a special horse and if he didn’t want to do something, he would wait until he wanted to,” Widden Stud’s stallion manager Nathan Curry said. “He was a quirky horse, but he was an easy horse to work with and one of those horses people enjoy working with. He was a great racehorse and a great stallion as well.”

Curry said those headstrong quirks endeared the stallion all the more to staff.
“He was a personal favourite of mine because of the way he was,” Curry said. “He was just one of those horses that seemed to recognise a person’s own quirks and then work well with them. He got on with most people, but he had his favourite people as well. He was a very special horse and we will miss him.” 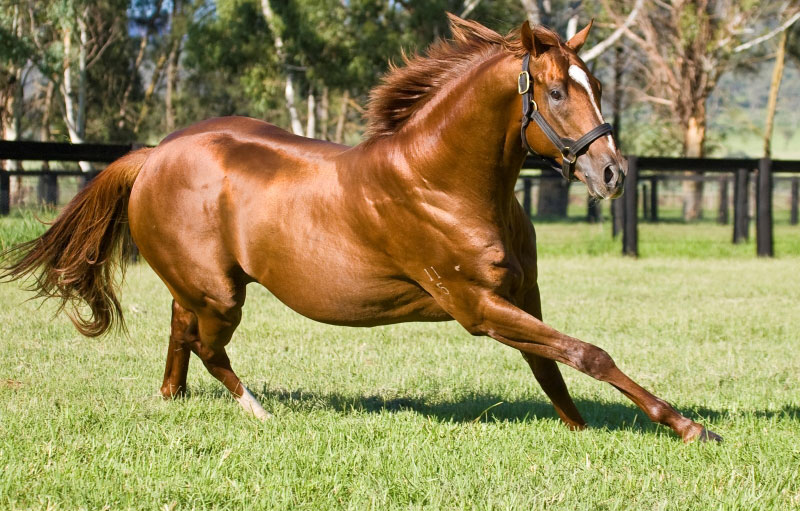