Continuing our series on the major mentors to successful professionals in the thoroughbred industry, TDN AusNZ chatted to leading syndicator and Star Thoroughbreds Principal Denise Martin about those who influenced her career.

Denise Martin enjoyed a successful career in the hospitality industry before she combined her years of international and domestic business experience with a passion for racing to establish Star Thoroughbreds.

The Sydney-based Martin’s Star Thoroughbreds has celebrated multiple successes at the highest level with its racing colours of purple with white stars and white cap a familiar winning sight across the tracks of Australia for nearly three decades.

She has been the recipient of sage advice from legends of the turf over the years with a trio of trainers in the late Tommy Smith and his daughter Gai Waterhouse and Chris Waller among her mentors.

But her first major influence was her late father Geoffrey Bernard (Paddy) Martin, who during her Tasmanian upbringing provided the spark that would evolve into a passion for thoroughbreds.

“My dad, TJ and Gai and Chris have been my main mentors. My dad in all walks of life and the other three in business and life as well, they have been key supporters of mine,” Martin said.

“I was born in Tasmania and my dad, who I would include as my primary mentor, was my great hero. He was an icon in Tasmanian sport and in the Hall of Fame and an extremely successful sportsman and businessman.”

“He had a very high profile in Tasmanian life and sadly passed away in June last year, but had an extremely full and wonderful life.

“When Dad finished competing at a high level in Australian Rules and cricket he became an agent for brands that we didn’t really know back then – Nike, Adidas and Reebok.

“He was very well-acquainted with the sporting icons of the time in this country, and to an extent overseas, who were associated with those brands.”

During her formative years, Martin was regularly exposed to the thoroughbred industry.

“My grandfather raced horses in a small way in Tasmania and Dad followed racing as a young man. He was very well known to a number of major trainers and racing people in Victoria,” she said.

“As a child, there were racing stations that would broadcast the equivalent of Sky Racing. The radio on a Saturday morning would always have the racing on, so it was something I naturally leaned toward.

On an early working holiday in England, Martin continued her love affair with racing.

“One of the first things I did was to go to one of the feature jumps meetings and I saw Crisp race. It was the most emotional race I think I have ever witnessed. To watch Crisp lead almost the entire way was amazing,” she said.

The Australian-bred Crisp (Rose Argent {GB}) shouldered a massive 72kg in the Grand National Steeplechase at Aintree and was out in front by 30l at one stage, before he was collared close to home by Red Rum (Ire) (Quorum {GB}), who was to win the race twice more.

“Through an associate I became involved in the hotel business. It was never intended it would be a major career. I worked in London at a number of major hotels and in South Africa,” Martin said.

“My career in hotel management was something that almost happened accidentally. It wasn’t my original plan, but I had a wonderful life working for major hotels internationally and in Australia.

“It was remarkable to meet the people that I did – heads of state, entertainers and musicians.”

A Star is born

Armed with an array of business skills, Martin was determined to go out on her own and, calling on her love of racing, the Star Thoroughbreds syndication business was born in 1993.

“I decided to establish my own business over 25 years ago and when I was asked why, it was a strange response at the time. I said to people that I wanted to see if I could operate a successful business and all these years later, hopefully I have,” she said.

Among the many celebrities Martin crossed paths with during her career in hospitality was Gai Waterhouse, who was to become an integral part of Star Thoroughbreds.

“I had known Gai casually through my hotel life in Sydney. I didn’t know her well then and at the time I was looking to establish my business, Gai had secured her licence and Te Akau Nick had won the G1 Metropolitan,” she said.

“I remember at the time it was one of the most wonderful things I had seen in racing, that she had fought to get her licence and trained a Group 1 winner.

“I thought it was fantastic and I asked Gai and Rob to come to the hotel I was at in Melbourne at the time and then I surfaced with my plan to establish Star and they were extremely supportive.”

Waterhouse then worked alongside her father Tommy in Sydney and subsequently took over the operation.

“I was fortunate enough to have my business with Tulloch Lodge and TJ Smith was an extraordinary mentor,” Martin said.

“He had a very simple, but practical philosophy for success. He was obviously a legendary racehorse trainer and was in the twilight of his career.

“I remember on day one or two of operating a syndication business I asked him what the key elements I should ask of someone who was inquiring about buying a share in a horse.

“TJ was someone who I got great advice from and his thoughts about yearling selection and racing overall was hugely valuable.

“He always insisted at the sales that we looked at the horses on type and I remember he said to me, it’s the animal doing the running and not the page.

“That has always stuck in my mind and I also worked for many years with Gai and her extraordinary success and optimism is legendary.”

“She is the best example of believing that a glass is half full and a genuine belief that anything is possible. Star and Gai formed a great association and she made sure that I believed in myself and to take Star to the top of the syndication business, she was another great mentor.”

A highlight of Martin’s association with Waterhouse was Sebring, who was purchased at the Magic Millions Gold Coast Yearling Sale for $130,000.

“Sebring won the G1 Golden Slipper S. and became a hugely successful stallion, they were extraordinary highlights. He was tremendous and to have bought him was remarkable,” Martin said.

Sebring passed away in early 2019 at Widden Stud after suffering a heart attack, but his influence is still of major significance. This season, he has sired 141 winners, a tally only surpassed by I Am Invincible, Written Tycoon and Snitzel.

Martin subsequently formed a partnership with Chris Waller and they continue to enjoy outstanding success.

“It’s almost eight years with Chris now and it’s been remarkable. He has become a world-class trainer of course and breaks records year after year,” Martin said.

“It was a great eye-opener for me to have Star with his stable at the time Chris trained Winx. He has a tremendous capacity to remain calm under extraordinary pressure, he is simply amazing.

“His commitment to his business is outstanding and he is so insightful. I can recall well when Invincibella was a rising 6-year-old and I asked him if she should be sold as a broodmare.

“He simply said to me ‘no, not yet’ and the following year she won the $1 million Magic Millions race for fillies and mares for a second time, won the G2 Dane Ripper for a second time and then the G1 Tatt’s Tiara and over $3 million.

“Chris has taught me many things and I believe mentors are with you throughout your life. His advice has been wonderful and he shows real patience is a key in racing these horses until they are much older.

“Invincibella won her third Magic Millions as a 7-year-old and then she was sold and is in foal to Justify. I’ve been very lucky in my personal and business life to have people that have been there with me and for me, and if you have those people I think you are very fortunate.

“When Invincibella won her Group 1 and three $1-million races on Magic Millions Day and became I Am Invincible’s greatest stakes earner were proud moments.

“I had 20 years with Gai and now eight with Chris and both are fantastic people who I admire so much.”

“There are highs and lows in racing all the time. The key is to always enjoy the highs as much as you can because it’s a hard business,” she said.

“We have been very fortunate to still have had people with us as owners from the outset and they have become great friends and supporters. In their own way, they are mentors as well.”

And coming full circle, her father Paddy’s early words of advice and life lessons learned from him have been integral to Martin’s success, both in the hotel business and through her ongoing Star Thoroughbreds journey, as well as wider family members.

“When I established Star, I didn’t know if the business would be successful, but I knew I would work as hard as I could to make it a high-quality company. It was a remarkable new challenge and I always had the support of my family,” she said.

“Dad was a kind and thoughtful person and respectful. He taught us that commitment to a task was key to success and if you had a vision and you worked hard to achieve it, you would most likely succeed.

“He taught me that respect and kindness to others wasn’t just a key ingredient to success, but also key to a happy and fulfilling life.” 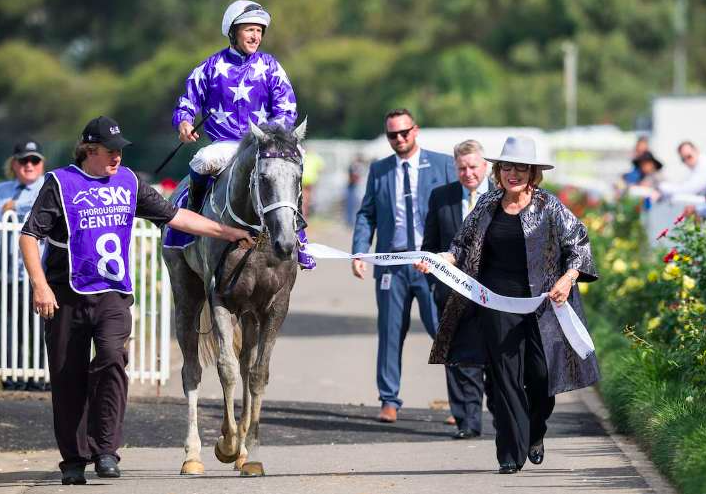